Our first function since December 2019 saw us return to Rushmere Golf Club on 7th October 2021 where 26 members and associates enjoyed a two course lunch which was followed by a raffle, proceeds of which were raised to supplement prizes for our Grand Christmas Draw.

Grateful thanks to all who donated prizes at this function to enable a healthy amount to be raised.

The next function will be our Christmas Lunch on Thursday 9th December 2021 at Bramford Golf Centre, Loraine Way, Bramford, IP8 4JS.

​Meet from 11.45am onwards for lunch at 12.45 to be follwed by our grand draw.
​On 3rd December, a beautiful sunny day, 37 members attended the annual Christmas Lunch held at Rushmere Golf Club. Last minute health issues and hospital appointments robbed us of another half dozen members who missed an excellent meal which was followed by the Grand Christmas Raffle which provided over 40 prizes.
​
It was heartening to see the number of attendees were sustained from last year and gives encouragement to Tony and David to arrange further functions in 2020.
On 24th September 28 members made their way to Bramford Golf Centre for the Ipswich Branch Autumn lunch. This was a new venue for us and didn't disappoint as the fayre produced was of the highest standard which immediately prompted calls for a return visit next year.

A big thank you to those members who bought Christmas raffle tickets at this early stage which allows for spending to commence for draw prizes. The Grand Christmas Raffle will take place after our Christmas Lunch on Tuesday 3rd December at Rushmere Golf Club, Nr Ipswich. Invitations for this event should be sent out to members during late October.
On a beautiful sunny day, on 25th June, 46 members and guests gathered  at Rushmere Golf Club to celebrate the 40th Anniversary of the formation of the Ipswich Branch. We were delighted to welcome the National Association secretary Colin Hill along with representations from both Chelmsford and King's Lynn branches. Although no original members were with us today we did have 104 year old Mary Green in attendance who assured us that she had only missed one or two of the original functions.

The wonderful buffet on hand was just perfect for the occasion and was a fitting choice seeing as the very first function in 1979 consisted of a ploughman's lunch costing a princely sum of seven shillings and sixpence. As an added extra one of our members, Margaret Payne presented the club with a beautifully decorated cake for the occasion.

Scroll down to see photographs taken on the day. 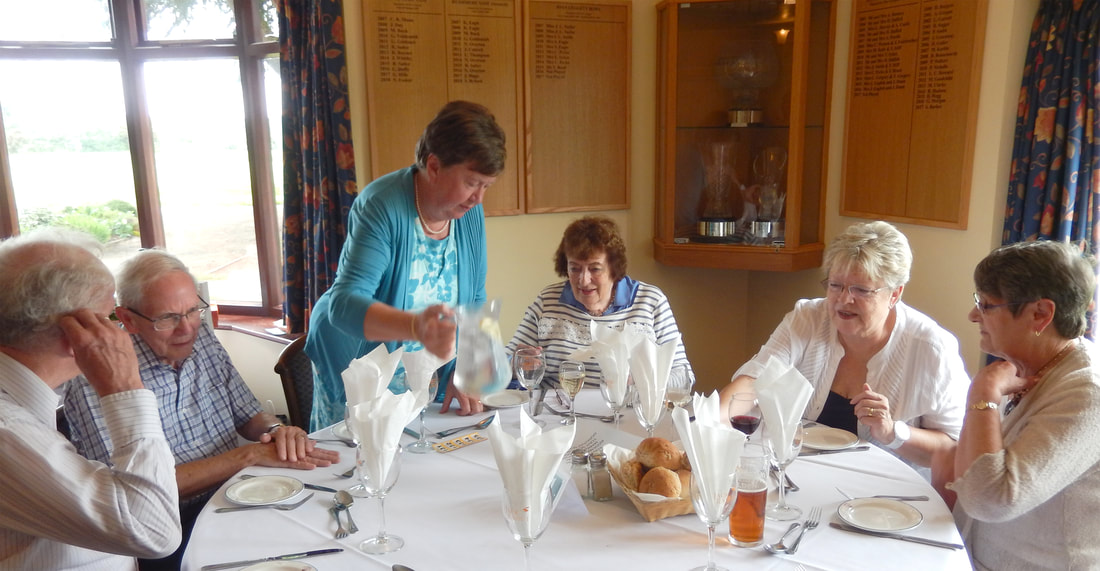 On 11th April 2019 28 members sat down to an excellent two course lunch at the Ipswich Ski Lodge restaurant. It is a tried and tested venue which seems very popular with members and is very reasonably priced. The customary raffle followed which allows proceeds to go towards prizes held at the branch's grand Christmas event in December. At the event three of our long serving members who have all passed away since the beginning of the year were remembered and remain in our thoughts.

Future events are as follows:

The 2018 Ipswich Branch Christmas Lunch was held on 13th December at the Best Western Hotel, Copdock where 39 members sat down to a two course lunch followed by mince pies, mints and coffee. In times where we see our numbers diminishing, it was heartening to see such a good attendance. It was good to catch up with those members who have not able to attend too many of our functions during the past year and we were appreciative of those members and guests who had travelled a considerable distance to be with us.

The lunch was then followed by our annual Grand Christmas Raffle which saw most members take home at least one of the many excellent prizes on offer.

We look forward to 2019 which will see the Ipswich Branch celebrating its 40th anniversary, having held its first ever function in May 1979 which consisted of a simple ploughman's lunch.

31 members and guests enjoyed lunch on 16th October 2018 at the Black Tile, Martlesham.
On 19 July 2018, 12 members and guests had a most enjoyable lunch in pleasant surroundings, at Hintlesham Hall, a fine Queen Anne Style hotel with fine dining and accommodation – originally it was a Manor House dating from the 1400’s. The weather was perfect.

The first lunch of the year was held at the Ski Lodge Restaurant on 10 April when 27 members and guests enjoyed a superb lunch of the highest standard. The branch AGM was held and both Tony Grayston and David Cattermole agreed to continue duties as joint secretaries.

Christmas lunch will be held on 13th December at the Best Western Hotel, Copdock.
© SMBP 44 Association 2021